"I understand the reluctance but I think the concept of using corporate strengths for the greater good needs to be developed. I can think of many companies where staff would be happy to devote part of their own time, and even their own money, to a well-designed scheme that helped relieve energy poverty." 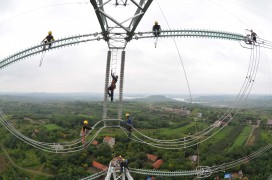 The energy market has many dimensions – from the ever volatile oil price to the environmental challenges of climate change. It is worth remembering, however, that for one person in six worldwide energy is a matter of subsistence and survival. The only energy to which they have access is wood or dung collected by hand. With electricity or any of the other sources of heat, light and mobility which we take for granted they are unable to improve their circumstances because without energy there can be no agriculture, no trade and no education.

Around 1.3bn people live like that. Even more people – some 2.6bn in total – rely on cooking stoves that run on biomass which have awful side-effects on health causing as many as 3.5m premature deaths a year.

The number of people living and dying in conditions of absolute poverty is falling but only slowly because population growth, especially in sub Saharan Africa, continues to cancel out many of the gains being made in other parts of the world. According to the most recent forecast from the International Energy Agency, the number of people without access to electricity will still be over 960m in 2030. That number could be higher still if recent forecasts of population growth in Africa and India prove to be right.

We should be more shocked by these facts than we are. Too many people shrug sadly and murmur that the poor will always be with us. The reality is that they don’t have to be. Over the last three decades, the Chinese have succeeded in lifting hundreds of millions out of poverty and subsistence – a remarkable and unprecedented achievement. We are now within sight of the time when no one in China will lack access to proper energy supplies, even if the use of primitive cooking stoves remains a problem.

Eliminating energy poverty does not have to rely on governments with Beijing’s level of centralised authority. A fascinating new set of short essays edited by Professor Sir Brian Heap for the Cambridge Centre for Development Studies illustrates just how much can be done at a micro level using technology that is already available. Smart Villages takes examples from a number of developing countries, including Kenya, Uganda and Tanzania, which are struggling with energy poverty especially in rural areas away from the grid where more than half the villagers remain off-grid ( the book is available on e4sv.org ). Malaysia on the other hand has made great strides to reach villages, though about 5 per cent are off-grid in Borneo.

The examples demonstrate the power of electricity to transform the lives of individuals and whole communities. The power can come in different ways – from pico-power systems that can generate just 0.01 kW, sufficient for lighting, radio reception and simple two-way mobile links, through standalone home systems to micro and regional grids. Micro grids can supply community services. Regional grids (mini-grids) can reach many thousands of people and power the full range of electrical goods. The smaller systems are predominantly solar powered, the bigger grids can also use hydro, wind and biomass, even a so-called “hybrid” mix.

The impact of access is powerful in so many ways. Households can have access to clean water, and communications systems can link the most remote villages to web based health systems such as the Swasthya Slate – the use of a mobile tablet as a basic tool of diagnosis. Most important of all, accessible power can help create productive enterprises and the potential for exchange and trade.

The essays deserve to be widely read. There is so much that could be done at a very low cost. Of course money matters, but this not particularly about aid. The challenge is much more about organisation to give people the opportunity to use the technology that is already available. A crucial element is finding a viable financial mechanism that can help families and villages to get the equipment and to pay back the cost out of the revenue it can generate. As Tobias Schmidt writes in his contribution to Smart Villages this is a matter of spreading risk, creating revenue flows and of developing a system to collect payments in communities completely unaccustomed to financial transactions. Complex yes, but surely not impossible.

The banks could help but perhaps the energy companies themselves could do more. The solar companies have a direct interest but in most cases do not have the capital on the scale required. For the bigger energy companies the calculation of self-interest is more complicated. Corporate social responsibility is widely accepted but the definition of responsibility tends to be limited. Companies are wary of taking on roles that they believe are really for governments.

I understand the reluctance but I think the concept of using corporate strengths for the greater good needs to be developed. I can think of many companies where staff would be happy to devote part of their own time, and even their own money, to a well-designed scheme that helped relieve energy poverty. It has started to happen but the issue goes beyond charity and is really a matter of enlightened self-interest. Companies need secure environments in which to operate and wide social divisions do not make for stability. Most of the growth of the energy business, including the power sector over the next half century, will take place in the emerging markets of the world – often in places where growth and economic progress live uncomfortably side by side with persistent poverty. International energy companies cannot afford to settle for living in gated communities.